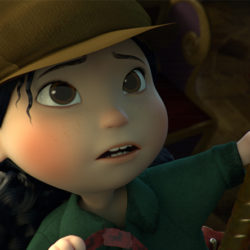 Cinzia Angelini Talks On Cultural Diversity Through AnimationThe Dreamworks/Disney animation veteran talks at the recent TEDxVail.Originally from Italy, Cinzia moved to Los Angeles in 1997 and has ever since worked as a 2D/3D animator and story artist for studios like Dreamworks, Disney Animation Studios, Warner Brothers, Sony Imageworks, Illumination, and CinesiteCinzia. Her work includes “Balto,”[…]

The WVoice A digital publication advocating women’s rights published byWomen’s Voices Now About Contributors Submission Guidelines Do you think you were influenced by the animated films you watched as a kid?Ever dreamed of being an invincible superhero, a fantastic magician, or a magical fairy? Perhaps you dreamed of flying to Neverland, and “saving the day”[…]

We are seeking a final layout artist to help finalize the production. We can offer a credit, use of your work before the film release (PW protected) and hopefully a great experience with really experienced supervisors supervisors. If you are interested please email us at info@milafilm.com Share and spread the word if you can! Thanks!!